The aim of a brassica producer is a high yielding high quality crop that satisfies the end user. Ther are a large number of agronomic factors which can influence this, many are within the control of the grower under given drowing sytems and climatic and soil conditions.

While cabbages will grow at temperatures above 7°C (45°F), they grow best at 15- 18°C (59-64°F). As temperatures increase cabbages are more prone to tip burn. Above 27°C (81°F), plants may bolt, causing the heads to split open. They have moderately high frost tolerance. Most common practice is to transplant greenhouse raised plugs into the field. Cabbages need a constant water supply and good soil aeration. On light soils, in anything other than temperate climates, irrigation is needed. Lack of water leads to poor development of outer leaves combined with small firm heads and a stronger taste.

Irrigation after a period of drought can lead to a splitting of cabbage heads, due to a rapid increase in growth. Early cabbage varieties suit locations with an early start of vegetative growth and low risk of early season frost. Cauliflowers are also a cool-season maritime crop with distinct temperature requirements for producing the best curds. Minimum mean day temperatures for winter cauliflowers need to be above 4°C (39°F) and before curd development starts, short frost periods up to - 10°C (14°F) are tolerated. Optimum daytime temperatures are 18- 20°C (64-68°F).

Leaf production has to be optimum to sufficiently cover and protect the curd, maintaining a good white blanched nature.

Broccoli is a hardy, cool season brassica, which will germinate and grow in temperatures from 4 to 35°C (39-95°F). Optimum temperatures though are 16- 18°C (61-64°F). Although a cool season vegetable, production occurs in hotter climates. Here correct choice of variety is critical.

Irrigation and good soil moisture control is necessary and extreme temperatures can lead to accelerated growth and hollow stem.

Brussels sprouts are a cool-season crop and grow best when daytime temperatures average about 18°C (64°F) or less.

The best quality brussels sprouts are produced in good autumn or winter sunlight conditions, because high temperatures result in poor quality produce and increase puffiness or looseness in the harvested button. Sprouts can withstand heavy frost. They are often planted for harvest in the winter when sprouts have a tighter button and a milder flavor. 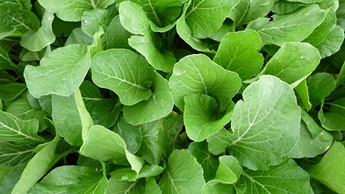 Leafy brassicas have a 4-5 week growing cycle and need a good nitrogen:potassium balance for productive growth. As many as 7-9 crops can be achieved every year through regular cutting of low growing crops. They grow best in cool, moist environments, but are more commonly found in higher temperature, fast-cropping situations.

Bolting due to cold temperatures can be a problem in crops planted too early in spring in cooler climates.

YaraMila COMPLEX
12-11-18 + 20% SO3 - Prilled NPK fertiliser which also contains magnesium and sulphur as well as micronutrients ideal for use on a wide range of arable and horticultural crops.
YaraLiva TROPICOTE
15.5% N + 26.3% CaO - Granular calcium nitrate fertiliser for field application to a wide range of crops.
YaraLiva NITRABOR
15.4% N + 25.9% CaO + 0.3% B - Granular calcium nitrate fertiliser with added boron suitable for field application to all crops especially brassicas which are more prone to calcium and boron deficiency.
STARTER SOLUTION PLUS
A liquid fertiliser for placement which aids rapid crop establishment, promotes efficient utilization of phosphate and improves phosphate availability.
YaraVita BRASSITREL PRO
A flowable liquid suspension fertiliser with a combination of micronutrients including manganese, magnesium, boron and molybdenum for foliar application to oilseed rape, brassicas and legumes.
YaraVita THIOTRAC 300
A fully formulated liquid fertiliser solution containing 300 g/l sulphur for foliar application to prevent and treat sulphur deficiencies on a wide range of crops.
See all fertiliser choices Boost boron and calcium levels in late season brassicas
Late season vegetable brassica crops are susceptible to several quality issues which can reduce marketable yield. Boosting levels of calcium and boron in these crops via nutrition will prevent many of these quality issues and so can increase profitability. How to influence vegetable brassica quality

Good nutrition is an essential pre-requisite for a high quality brassica crop and influences all aspects of quality: appearance, size, weight, shelf life and importantly taste and nutritional content. How to prevent tipburn in vegetable brassica

Tipburn is generally related to calcium and/or boron deficiency. Tipburn is a major concern in head forming brassicas, because it develops approaching maturity, or during storage, leading to loss of quality and marketability.

Recommended analyses for arable crops including various leaf and soil analyses as well as analysis of organic materials and heavy metal contamination. How to prevent hollow stem in vegetable brassica

Hollow stem is a physiological disorder in cabbage, cauliflower and broccoli - frequently linked to calcium and boron deficiency or over-supply of nitrogen.

Yellowing and chlorosis in vegetable brassica

Deficiencies should always be checked by using leaf tissue analyses, as many of the symptoms resemble each other.