Strawberries are grown in a wide range of different production systems with the objective of producing high yields of quality fruit with sufficient flexibility to meet market demands and labour availability.

Strawberry plants are ‘raised’ or grown-on in a number of different ways prior to planting out.

Waiting bed plants are grown on from runners and planted into a ‘waiting bed’ to produce a large, strong plant. This is then lifted when dormant and cold stored for spring or summer planting.

Tray plants are produced from runner ‘tips’ harvested from mother plants in mid-summer. They are then grown in heated glasshouses until the crown size is approximately 17mm in diameter and then planted under protection for an early and long season crop.

Misted tip plants are produced in the same manner as tray plants, but are forced quickly under tunnels for four to five weeks and then planted in early autumn for a crop the following summer.

Bare root runners are produced as rooted, runner plants from a field grown mother plant, then lifted and cold stored before planting in early spring. They are smaller runner plants but can be used to establish an ever-bearer crop. Runners can also be overwintered in the field in colder regions (above 55° Latitude). They are lifted and planted in spring or early summer. While this is a cheap option it is no longer common practice.

There is also a wide range of strawberry cultivation systems. Worldwide, most are still produced in open fields. Most field crops are mulched, either with straw or with plastic to aid weed control, conserve moisture, to help reduce contamination by keeping the fruit off the soil surface and bring forward harvest. 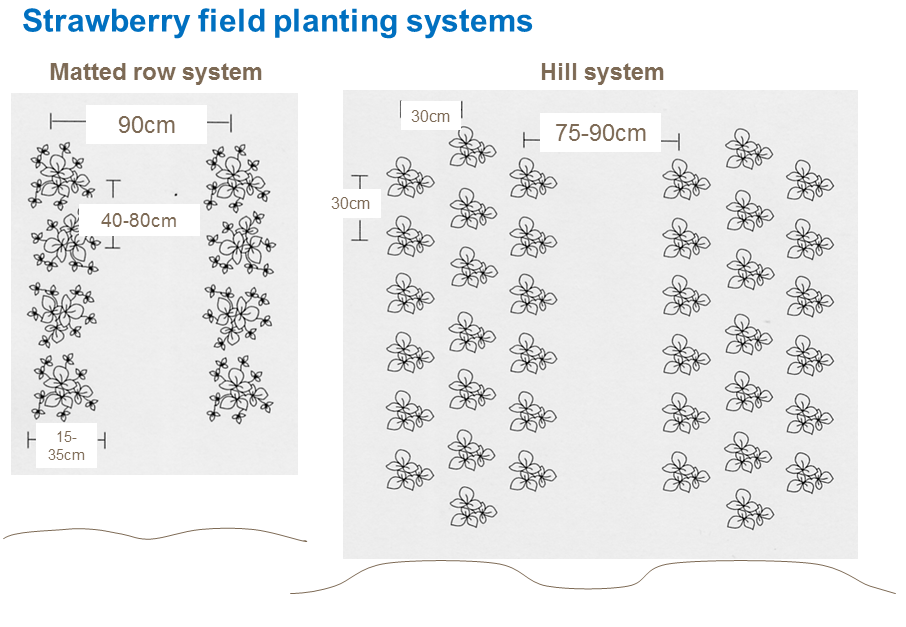 The hill or plasticulture system uses the crowns to produce fruit with any runners removed to encourage the plant to focus on production.

It is used to grow day-neutral varieties across most regions, but also short-day types in climates where the plants will survive winter and summer conditions. Plants are transplanted into raised beds which are covered with plastic. The plastic warms the soil, suppresses weeds and brings production forward. Using raised bed production also improves soil drainage. Strawberry plants grown using the hill system are planted more densely to produce high yields and remain viable for only a couple of years. A typical planting density for hill production is 50,000 plants/ha in single rows or 75,000 plants/ha as a double or three row set. More prolific varieties are spaced further apart.

Matted row production allows the mother and daughter plants to grow side by side with plants trained to run in narrow rows. Grown over a two year production cycle, spacings are less dense at around 35,000–40,000 plants/ha. Matted-row production, although less intensive and lower yielding, is lower cost and is commonly practiced where hill production is not possible, particularly in cooler climates. Seasons are extended by the use of day neutral types in warmer climates (e.g. USA) and through tunnel production (e.g. Northern-Europe). Tunnel production – utilizing polythene film supported by semi-circular steel frames to cover the raised beds – is widely used in Europe and the USA and helps to bring forward harvest by around 1 month and also to extend the season.

"High tunnels" - taller structures that are also enclosed against the elements - are usually passively heated and cooled, so operating costs can be minimal. Drip irrigation and plastic mulches are commonly used in crops planted into soil at high plant densities. In tunnels or glasshouses, strawberries are usually produced using the annual hill production system, spaced 30cm apart in staggered rows, with 2-4 rows in each bed (Figure 4).

Growers tend to use either white plastic which keeps plants cooler in the summer months or black plastic or fleece to warm them in the spring and maintain a higher heat in the summer. Drip tape is commonly employed under the plastic to facilitate irrigation and fertigation. Plants can be grown in bags filled with the desired soil mix or substrate which are then placed on top of the ground. More intensive glasshouse production – at planting densities of 12 plants per m2 (120,000/ha), utilizes peat and or coir or soil-less substrate such as perlite, in high elevation structures which are raised above the soil or ground level.

Table top systems, where the plants are grown in a plastic tray or gutter system, suspended on wires 1.5m above the ground, benefit from the use of closed irrigation and fertigation systems that provide a continuous, balanced supply of nutrient to the plants (See Application strategies). This system – using a range of growing media - allows the grower to supply the right nutrient at the right time without the inefficiencies of soil supply, lock-up and leaching which can be a problem in field grown strawberries. Fertilizer requirement needs to take into account water quality and nutrient availability from the growing medium that is being used.

Coir or coco peat – a waste fiber from coconut husks – is increasingly popular for use as a substrate in bags, slabs or pots. It needs to be prepared to remove fines and salts such as sodium chloride, which limit root development. Coir provides a better, more stable, growing media than peat and a higher level of production consistency – it is also less acid than peat at a typical pH of 4.5-6, compared to peat at 3.5-4.5. It requires an adapted fertigation programme with higher levels of calcium to balance the naturally high potassium levels in the coir, which depending upon product grade can vary from 1.6-2.0% on a dry weight basis. Coir can be used for up to four seasons and because of its more open structure water management around the roots is easier to control.

Strawberries grown in bagsWhen strawberries are grown in bags, soil born pests such as nematodes and grubs are more easily controlled in this relatively closed environment, through the effective use of pesticides or natural parasites.

Heating, cooling and lighting, plus the use of carbon dioxide enrichment, helps to boost production and maintain an extended harvest in glasshouses. While expensive to run and operate, table top glasshouse production eases picking and cuts harvesting costs by around 30-40% compared to field cultivation. The system also improves fruit quality and, through intensive fertigation and crop protection, allowing out of season production, a much higher yield and potentially better financial returns.

In the past, soils have been fumigated prior to planting, but such practice is increasingly regulated, due to the highly toxic nature of the fumigant and its effects on natural soil organisms, and is being phased out in most countries.

Carbon dioxide is increasingly used to improve growth and yield in a controlled glasshouse environment. It has a direct effect on vegetative growth leading to a significant increase in root, stem and leaf production.

At later stages of growth, carbon dioxide also prolongs flowering without influencing significantly the length of time of fruit growth. 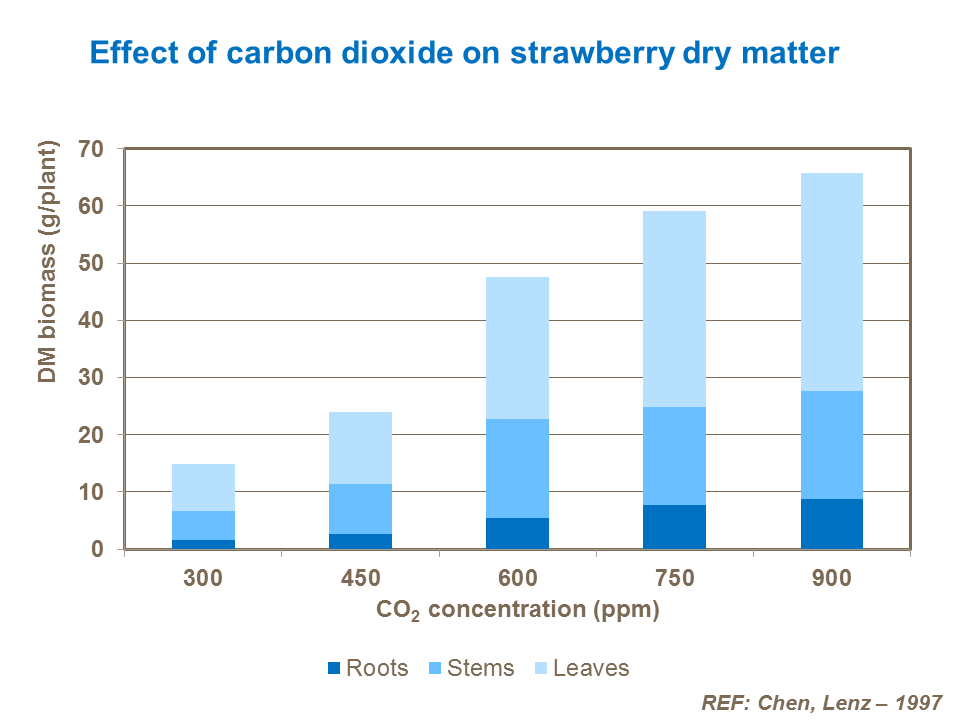 Carbon dioxide concentrations of up to 600ppm also help plants to better utilize nutrients and growers should increase fertiliser use accordingly.

Water use efficiency is also improved in controlled CO2 atmospheres.

In addition, utilizing carbon dioxide in the glasshouse helps boost fruit quality through improving the sugar content in the fruit.

The end result is a higher yield – particularly where nutrition is not limiting. How to increase strawberry fruit numbers Strawberries have no specific requirements in terms of soil type however they are very sensitive to salinity so irrigation and fertigation needs to be carefully managed. The aim of every strawberry grower is a high yield of top quality fruit and there are a number of agronomic principals which can influence this. A correct balance between macronutrients and micronutrients is essential to achieve the best possible yield and quality from strawberries.