How to increase oat grain numbers

Nitrogen will affect the number of grains that are set on individual ears. A high yielding crop of oats will have approximately 30-40 grains / ear, however if nitrogen supply is limiting this will be reduced. 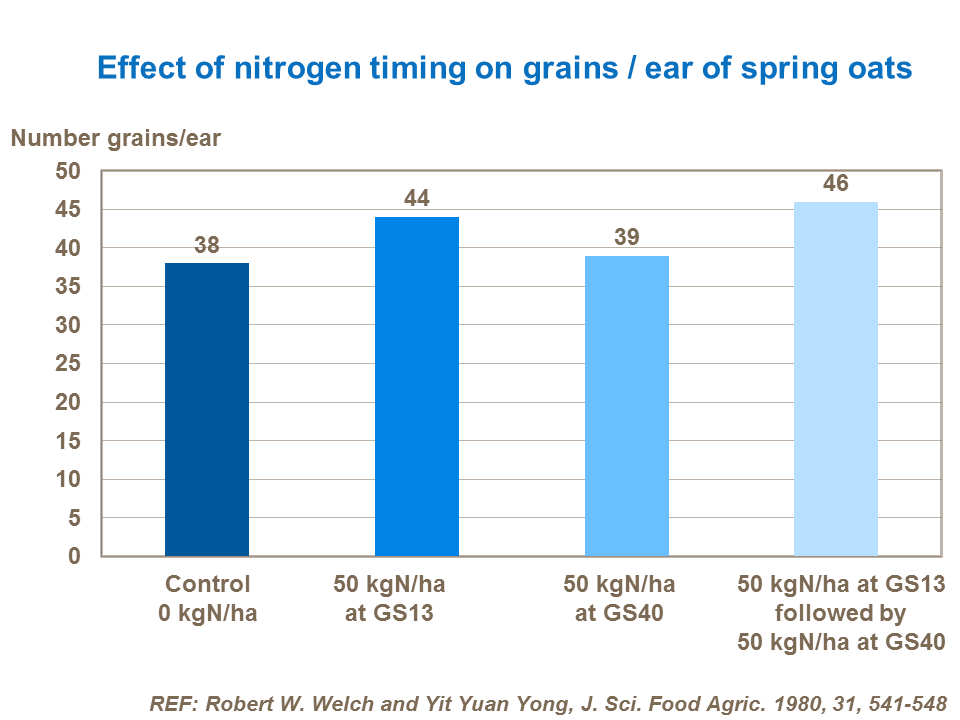 The timing of the applied nitrogen is important as grain numbers are determined early from double ridge to floret initiation.

Early applications of nitrogen increases the number of grains / ear.

Manganese, zinc, copper and boron are the essential micro nutrients that affect the number of grains/ear and hence increase grain yield. Copper affects the quality of pollen and therefore the number of grain sites that set seed. Blind sites are associated with copper deficiency.

The number of eventual grains per ear varies from season to season and is affected by a number of factors including: How to increase oat yield

The main components of oat yield are grain numbers and individual grain weight. Both of these components are strongly influenced by nutrition.

Key to achieving high oat yields is to maintain the green leaf area right through to the final grain filling period, capturing as much of the incident light as possible and converting it to yield. How to increase oat leaf and shoot numbers

The number of leaves and shoots determines the size of the canopy and the final number of ears at harvest. Nitrogen, phosphate and sulphur are the most important for increasing leaf and shoot numbers. How to increase oat grain size and specific weight

YaraBela AXAN
27% N + 9% SO3 - Granular uniform compound nitrate based nitrogen and sulphur fertiliser for use on all crops.
YaraMila ACTYVA S
16-15-15 + 6.5 SO3 - Granular fertiliser often used for grassland, winter cereals and oilseed rape to supply phosphate and potash together with nitrogen and sulphur.
CHAFER NURAM 35+S
35% N + 7% SO3 - A liquid nitrogen + sulphur fertiliser suitable for use on a wide range of crops.
YaraVita GRAMITREL
A flowable liquid fertiliser with a balanced combination of micronutrients including manganese, magnesium, copper and zinc for foliar application to cereals.
YaraVita GLYTREL MnP
A liquid micronutrient fertiliser containing a manganese and phosphate for foliar application to a wide range of crops and for use as a seed treatment on cereals and maize.
YaraVita MANTRAC PRO
A flowable liquid micronutrient fertiliser containing 500 g/l of manganese for application as a foliar spray or seed treatment to a wide range of crops.
See all fertilisers choices