H₂S in a Wastewater Treatment Plant

H₂S in a wastewater treatment plant

Yara’s YaraNutriox offers a preventive solution against H₂S and the odour pollution that comes with it. This solution includes a full set of services:

Dynamic YaraNutriox dosing allows sites with H₂S problems to eliminate odour, and prevent the exposure of WWTP employees to this toxic gas. Specially developed dosing equipment responds to the specific flows and other characteristics of the network to achieve the optimum usage rate.

Unlike some other treatment methods, controlled dosing of YaraNutriox has no negative impact on the wastewater treatment process and YaraNutriox can also fight against the corrosive effects of hydrogen sulphide.

Yara has developed YaraNutriox, a process that prevents septicity caused by lack of oxygen in the pipes of the sewer network and of the WWTP. YaraNutriox is a mixture of nitrates specially developed by Yara, with proven results in hundreds of sewer systems to fight against the corrosive effects of hydrogen sulphide. Communities throughout the world, such as York, Paris, Cologne and Montreal, use YaraNutriox against H₂S

YaraNutriox Reference: Over 600 sites in the UK & Ireland, more than 2000 in Europe and the world.

One characteristic of hydrogen sulphide is that it corrodes sewerage and WWTP structures. It attacks the concrete, copper, iron and silver. In the hot and humid atmosphere within a sewer, hydrogen sulphide will be oxidised into sulphuric acid by Thiobacillus bacteria (Gram-negative), on the walls of the pipe. This sulphuric acid is corrosive and attacks the wastewater and sewage treatment infrastructure. Corrosion particularly affects the submerged parts of structures in sewers or WWTPs.

The H₂S that results from this condition gradually degrades the pipe until it actually collapses. The speed of corrosion will depend on the extent of the septicity and the effectiveness of any treatment against H₂S in the network. Preventing H₂S with YaraNutriox also combats corrosion and avoids the collapse of pipes. 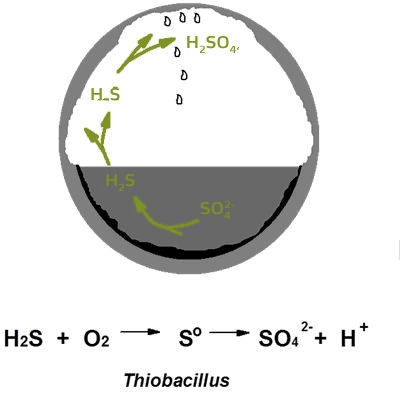 Fight efficiently against corrosion and H₂S

The corrosive effects of H₂S can be limited by taking action in the wastewater treatment plant (WWTP) or the sewer system.

Preventive treatment tailored to your needs

Following an on-site diagnostic, Yara recommends a treatment tailored to your situation. Dose only what you need. Our team of experts offers services such as on-site problem assessment, trials, guidance on dosing strategy, web-based telemetry (to control the dosage on site remotely from your desk) and tailored YaraNutriox storage and dosing equipment.

Protect your employees against the dangers of H₂S

In their daily work, operators and other employees at sewage treatment plants are potentially exposed to the harmful effects of hydrogen sulphide on their health. Since 2010, H₂S is considered a toxic gas by the European Union and subject to legislation concerning exposure limits. Under the regulations, it is the manager's responsibility to protect them. This regulation has applied since 2011 in the UK & Ireland. You can access this text here:

The dangers of H₂S

Besides its bad smell, in large quantities H₂S is irritating, and at very high levels in a confined space, it is particularly toxic. Water company staff who work in a closed environment are particularly vulnerable to this serious danger. It is the manager's responsibility to protect sewer workers against the dangers of H₂S.

The different levels of H₂S danger 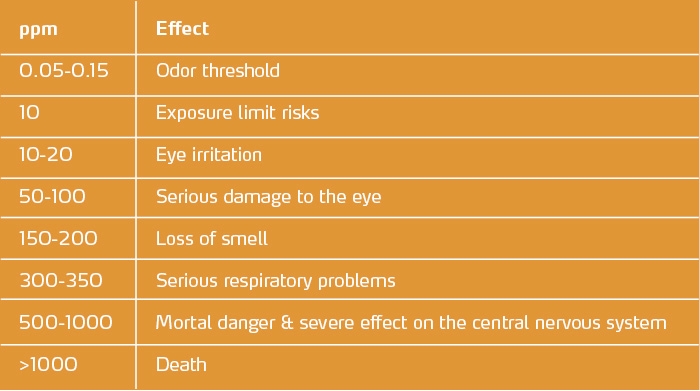 YaraNutriox is being used in hundreds of communities

YaraNutriox is a nutrient solution based on various nitrate salts - it acts as a biological reactor. Ensuring the bacterial balance in the sewer and pipes, YaraNutriox prevents the formation of H₂S. This process has been specially developed by Yara thanks to our knowledge of nitrates and actions nutrients. This is a natural process that acts at the source of the problem, to prevent hydrogen sulphide and odours that result.

We recommend to inject YaraNutriox:

YaraNutriox allows the site affected by the H₂S odour problem to treat only what is necessary. Not only does it eliminate the odour complaints from the community, but also the risk of employee exposure to this highly toxic gas.

Dynamic YaraNutriox dosing allows sites with H₂S problems to eliminate odour, and prevent the exposure of WWTP employees to this toxic gas. Specially developed dosing equipment responds to the specific flows and other characteristics of the network to achieve the optimum usage rate.