Ammonia emissions are an environmental burden and a loss of valuable nitrogen for plant growth. Mitigating ammonia losses from fertiliser application thus provides a double benefit.

What exactly are the causes and consequences of ammonia volatilisation?

Ammonia pollution from agriculture represents a high cost to society. According to the European Nitrogen Assessment, it is estimated at 12 € per kg of emitted nitrogen for health damages and 2 € for ecosystem damages.

Where does it come from?

94 % of all ammonia emissions in the EU result from agriculture. The remaining 6 % come from waste handling, road transportation and industrial applications.

Livestock excreta contain high amounts of ammonia. They are at the origin of 75 % of all ammonia emissions from agriculture in the EU (figure 1). Emissions from livestock can be reduced but are beyond the scope here which is focused to mineral fertiliser. 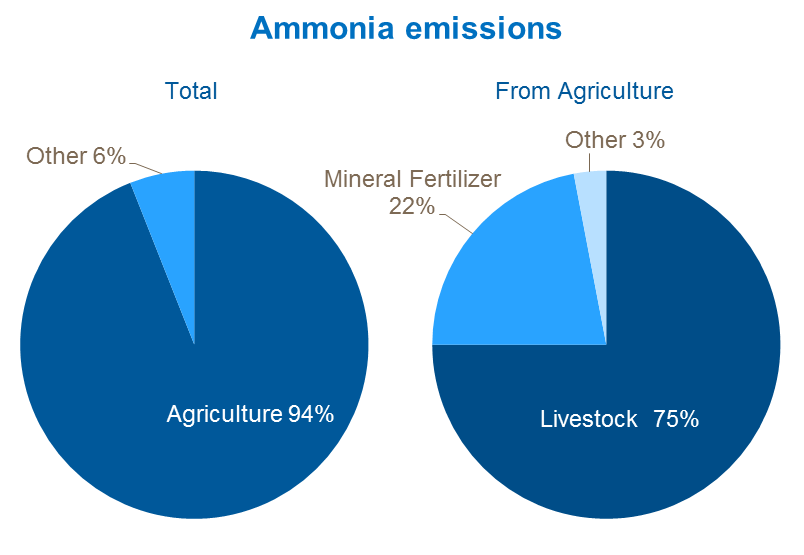 Mineral fertiliser application accounts for 22 % of all ammonia emissions from agriculture in the EU (figure 1). These emissions are due to the transformation of ammonium solved in the soil to gaseous ammonia. The rate of transformation depends on the soil pH level. The higher the soil pH level, the more ammonium is converted to ammonia. The higher the temperature, the more ammonia is then lost to the atmosphere.

Mineral nitrogen fertilisers either directly contain ammonium (ammonium sulphate, ammonium sulfate nitrate, ammonium nitrate, CAN) or are converted to ammonium in the soil subsequent to spreading (urea and UAN). Urea and ammonium containing fertilisers are therefore subject to potential ammonia losses. Urea, however, is specifically prone to ammonia volatilisation (figure 3). 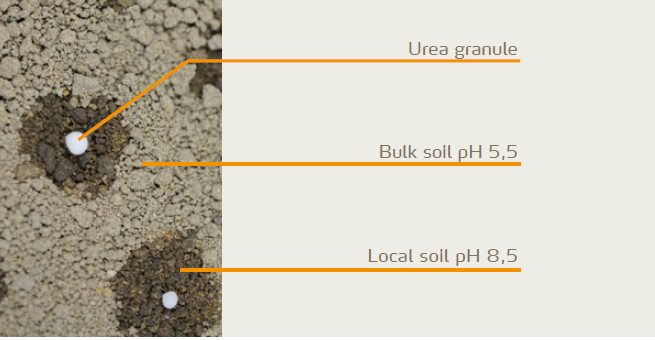 The case of urea hydrolysis of urea to ammonium temporarily increases the pH level in the direct vicinity of the application location. The increased pH level spurs the formation of ammonia, even on acidic soils (figure 2). 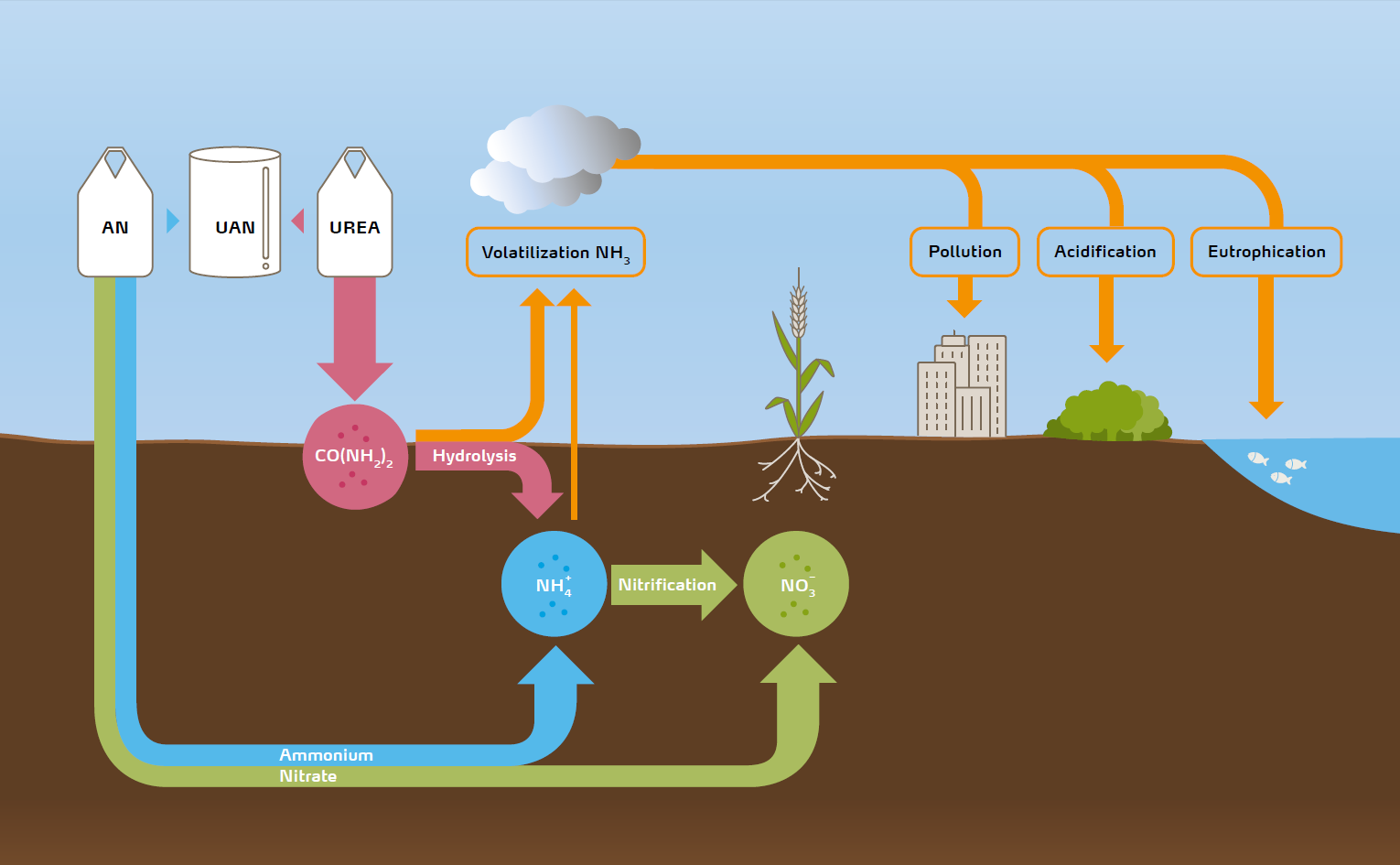 Figure 4 summarizes the estimated ammonia volatilisation from different fertiliser types. CAN and AN offer the lowest emission factors of all nitrogen fertilisers. 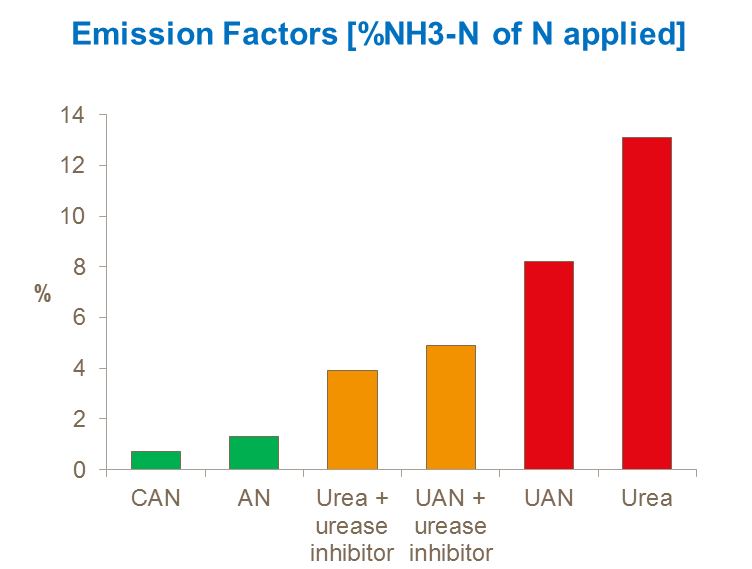 Table 1 shows the ammonia emissions from main mineral fertilisers according to the emission factors defined by the European Environmental Agency. Urea (53.7 %) and UAN (18.4 %) together account for 72 % of these emissions, while CAN and AN amount for only 2,9 and 4,6 % respectively. 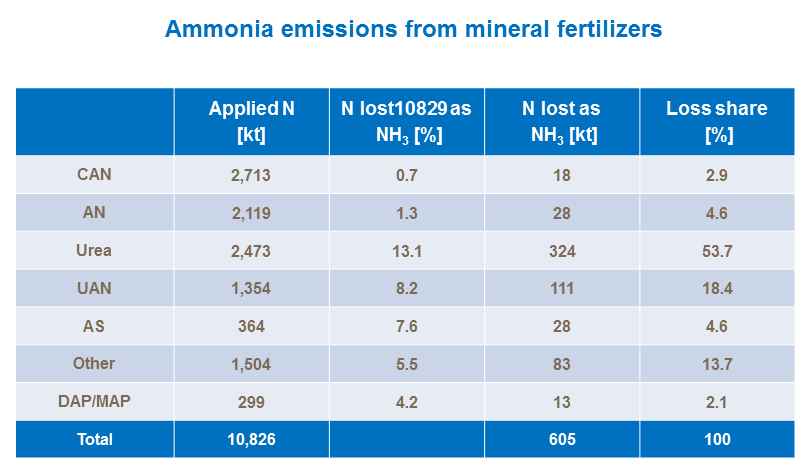 New NEC directive: what does it say?

Air pollution travels long distances and does not stop at national boundaries. It affects health of the most vulnerable and is responsible for acidification and eutrophication. What does Europe do to tackle the problem?

The European Union has put legislation in place to control air pollution. In 2001, the NEC (National Emission Ceilings) directive has set emissions ceilings per country for main pollutants (see table 1). In 2016, the NEC directive sets additional reduction targets per country.

The reference for the reductions to be achieved at the horizon of 2020 and 2030 are calculated based on actual emissions recorded in 2005 (figure 5).

The current status and the goals set out by the NEC directive are summarized in table 2.

It is worth noting that in some countries (e. g. France) ammonia emissions have increased since 2005 due to the extensive use of urea and UAN. 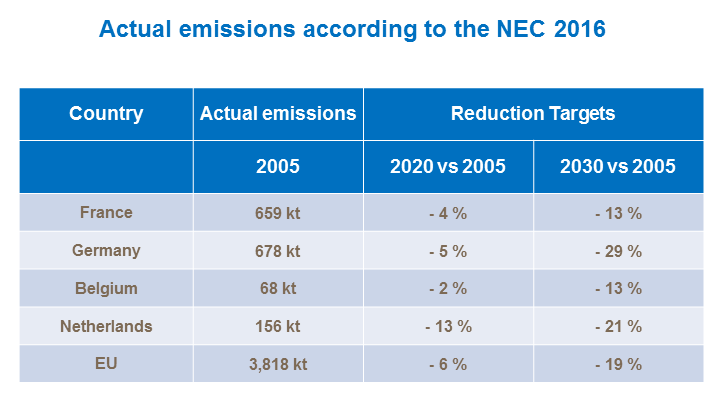 Ammonia emissions from fertiliser application can be significantly reduced. Each kg of nitrogen kept in the soil increases nitrogen efficiency and plant uptake. What are the practical measures to put in place?

More than 72 % of ammonia emissions from fertiliser application are caused by urea and UAN. Ammonium nitrate generates 90 % less ammonia emissions per unit of nitrogen than urea. Replacing all urea and UAN by ammonium nitrate could save 63 % of overall ammonia losses from fertiliser application in Europe. With a potential emission reduction of about 470 kt NH3, this is the single most efficient measure to reduce ammonia volatilisation. When volatilisation risk is high, only CAN or AN shall be used.

Urease inhibitors can mitigate ammonia losses from urea by about 70 % and from UAN by about 40 %. For this reason the new German fertilizer ordinance requires either use of urease inhibitors or incorporation of urea when urea is applied from 2020 on. However, ammonia emissions still remain more than 3 times higher then those from CAN/ AN.

Urease inhibitors can improve environmental and agronomic outcome but do not overcome other weak points of urea such as lower spreading accuracy and lower reliability. Furthermore, degradation of the inhibitor on urea bears the risk of much lower ammonia emission control than claimed.

Incorporation of urea into the soil immediately upon spreading, either by closed-slot injection or by cultivation, reduces potential volatilisation losses by up to 70 %. However, also in this case, ammonia emissions still remain more than 3 times higher than those from CAN/AN. Depth of injection and soil texture influence reduction efficiency.

Spreading urea under hot and windy conditions with no rainfall expected upon spreading shall be avoided. With dry soils, diffusion of ammonium and urea in the soil is slow and volatilisation losses are high.

Alkaline soils (high pH) result in higher volatilisation losses. Urea and UAN therefore shall not be spread on such soils.

Nitrogen compounds at a glance

NH4+ Ammonium:
a cation found in low concentration in soil solution and fixed by clay mineral.

NO3- Nitrate:
an anion found in the soil solution. Preferred nitrogen form taken up by plants.

NOx Nitrous oxides:
an abbreviation designating both, NO and NO2. Important air pollutant causing ground level ozone and a precursor of secondary particulate matter.

N2 Dinitrogen:
an unreactive gas that is abundant in the atmosphere Reducing carbon footprint from fertiliser
There is increasing focus on industries today to reduce their environmental impact as much as possible. With more of a spot light being shone on agriculture for emissions and GHGs (Greenhouse gasses), the ability to calculate your carbon footprint as a farmer is increasingly relevant.