The nutrition of carrots has a large influence on the growth and development and importantly on carrot quality. Several key nutrients are involved and it's important to ensure each of these is present in sufficient quantity but none more so than calcium which is particularly associated with quality.

Carrot cavity spot was originally thought to be a calcium deficiency disorder. In the last 10 - 15 years it was shown to be caused by the plant pathogen Pythium violae and controlled fairly successfully with fungicides. Recent reports have suggested enhanced microbial degradation of these fungicides, leading to sometimes poor levels of control.

Calcium is back in favour

Calcium needs to be applied early

Timing of calcium application is important as the nutrient uptake figures show that the plant has a requirement for calcium that begins during leaf growth so leaving application until root development may well be too late. 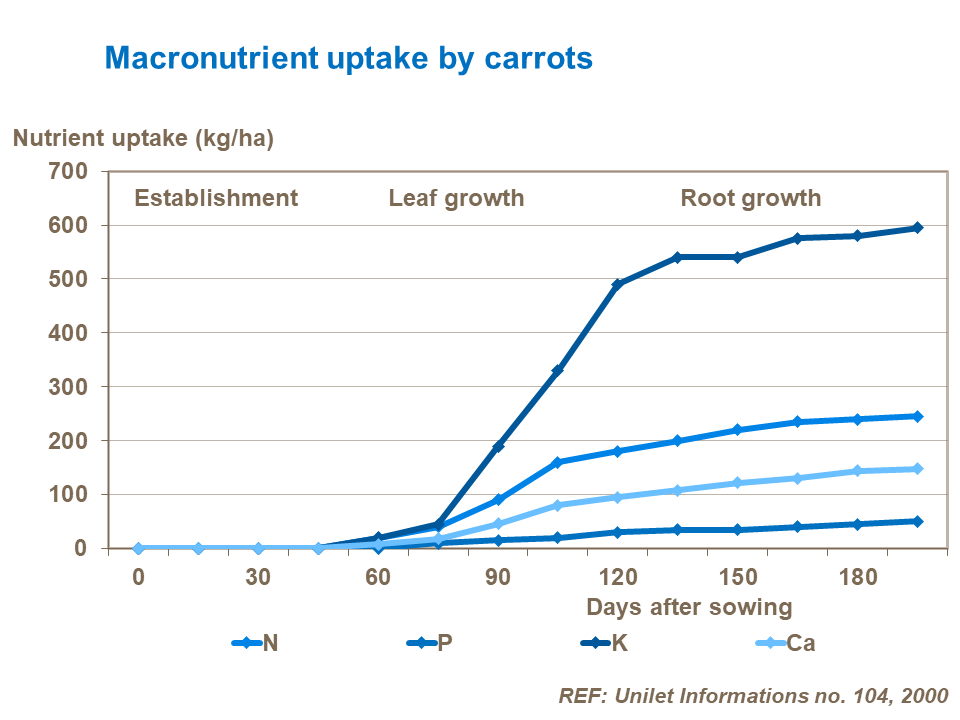 There is also a close relationship between calcium uptake and nitrogen uptake, reminding of the importance to apply both nutrients together at the same time as the N:Ca ratio will influence uptake and availability.

Calcium needs to be soluble to get into the plant

However, it’s not only the timing of calcium that needs to be right but also the source of calcium that is being applied. There is a misconception sometimes that liming materials will contain and provide enough calcium for the crop but many liming materials are calcium carbonate based. This means that they aren’t very water-soluble and consequently not freely available to the crops through the growing season.

Yara's recommendation is to apply  330kg/ha YaraLiva Tropicote (50kgN/ha) immediately after drilling or up to the 3-4 leaf stage. Apply a further 330kg/ha product at the 6-8 true leaf stage. NB: Adjust rates according to soil type, previous cropping and local climatic factors.

Check out our carrot crop programme

These YaraLIva calcium nitrate fertilisers are recommended for carrots

Are you looking for a crop nutrition programme for field vegetables?

See our fertiliser programmes for different field vegetable crops, begin by choosing which one.